One of the most common questions I get on email is "How do you sculpt stuff? I want to learn!" And it seems it's going to be quicker to write a bloomin' page of instructions and put it online than answer the same damned question every time!

First thing, before we start - this is NOT a guide on How To Sculpt Like the Masters. This is a simple guide on How to Make Wire Armatures and Then Practise Sculpting a LOT, Like Andy Does. 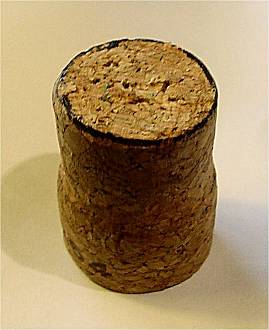 Without the cork, there is nothing for you to hold onto. Go ahead, try using just a plastic minis base or something - you'll just frustrate yourself by squashing your work all the time whilst manoeuvring your fingers. Corks can be bought in the wine-making section of your local department/hardware/chemist store. Goue two together for larger models! Or you can buy cork tiles, chop them into squares and glue those into a small pile of the right height to hold comfortably. Or try drinking wine like a fish and collecting them that way (Kids! Always ask your parents before doing this!). 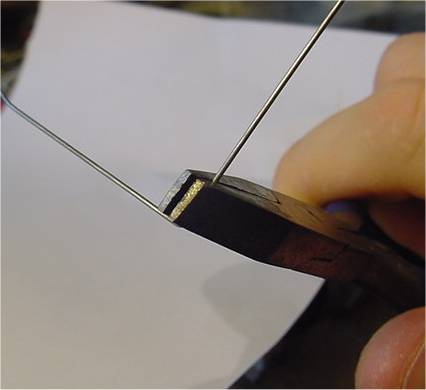 I use commonly available florists wire, from a flower shop down the road. It's good because it's thin but sturdy, can be bent easily into shape yet retains good position when pressed later on during the moulding process. You use whatever you like. Some people use solder, some use fuse wire, some use brass rod. Knock yourself out, man.

2.1 Take your wire and using some pliers, bend it into a squared-off 'U' shape. The base of the U is where the top of the model's  waist is going to be. For this example, I'm making a human male. The wiast is reasonably wide, but not as much as say, for an orc or some demon.

2.2 and 2.3 Once you have your 'U' shape - hey it's an 'n' shape now! - you want to shove it into your cork. The waist should be where the top of the waist is on a model of the same size and scale. There are hard and fast rules regarding anatomy, which I recommend you learn before trying to sculpt. You MUST know the rules before you can break them! 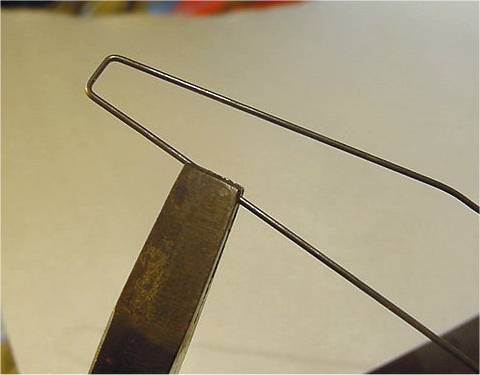 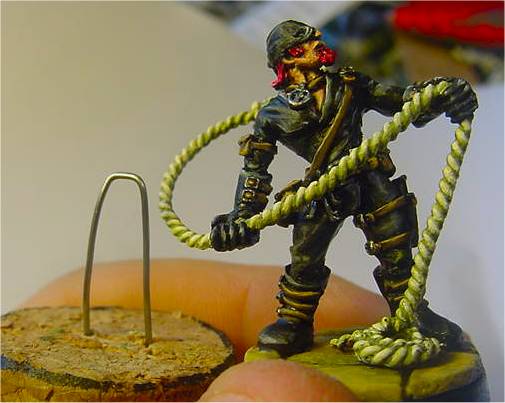 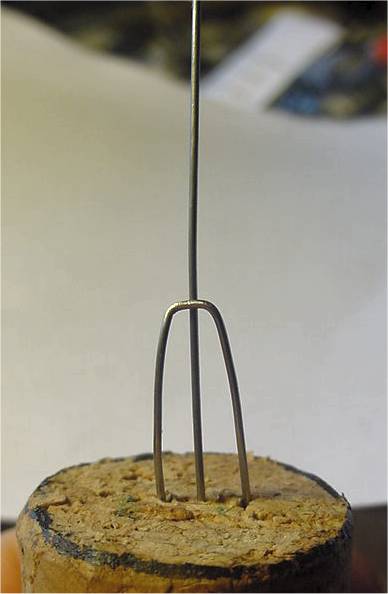 2.4 and 2.5 Now add the upright part - which is equivalent to the spine of the miniature. I simply shove the length into the cork and cut to the correct height, allowing for the head and neck, plus a bit extra just in case! Bend the wire to a sort of 's' shape. Get hold of some anatomy books from art shops or online at amazon - I like the book 'Dynamic Anatomy' by Burne Hogarth. He also does one called 'Dynamic Figure Drawing' which is very useful. A typical human in real life is about eight heads high, which means that their head is one eigth of the length of their entire figure.

Note: In miniatures sculpting, some people use a 5 heads scale, some use 6, others like me do whatever looks right at the time. I'm trying to work towards doing 7 or 8 heads high models, but the smaller your head the more difficult it is to get any character into the sculpt.

At this stage you should attach the spine to the legs using a soldering iron - I don't have one, so I use an alternate method which I'll explain in a moment. 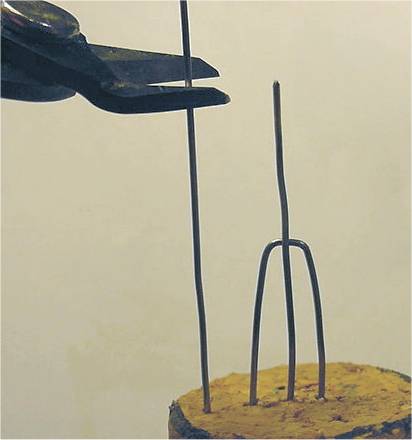 2.6 Arms - clip a length of wire the same length as your model is high. Arm length on a human is approximately the same length from fingertip to fingertip across the shoulders, as the model is from feet to the top of its head. For broader shouldered models, you should allow extra . Try practising and you'll see that sometimes it's whatever looks right, not whatever it's supposed to be. 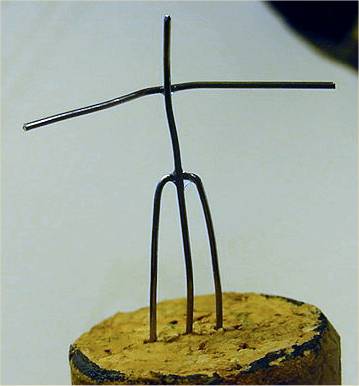 2.7 I glue the arms and legs to the spine using superglue. I understand the principles of soldering, but I can't be bothered to do it.

2.8 and 2.9 Strengthen the join by placing greenstuff over the waist/groin and where the arms meet the spine.  You may like to roll a small ball of greenstuff for the head so that you can see what's where later. Allow the model to dry under a lamp for ten minutes or so. The start sculpting!

Sadly, I haven't got time/talent to do a proper sculpting tutorial at the moment, but the yahoo group 1listSculpting has lots of useful links and things to help! 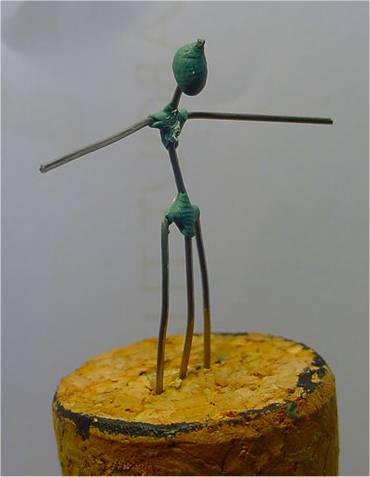 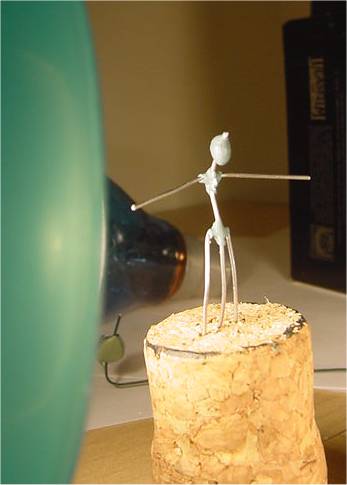 Hey, look: a new bit for this page! I took a few photos as I was doing a goblin armature. This will eventually be a Goblin Shaman casting a spell (holding a skull in the air as he chants) Pics run left to right, and then down. Then left to right. Then down again. Then...well, you get the idea...

This is 0.6mm wire. Pretty thin. I use bulkier wire for bigger sculpts.

This is Procreate Putty I'm using here. Slap it on, smear it across the wire to get good adhesion and gently shape it to a rough body shape.

Then do it some more, using metal tools as well as a size 0 taper clayshaper. (see tools section)

Flatten some putty to a foot shape

Annoyingly, Goblins won't be wearing boots, so I'll be doing toes. I've marked them in to show where they'll end up going.

Some leg bulking. It'd be nice to leave them this thin, but they won't cast. Or if they do, they'll snap very easily.

All the indents were done with the clayshaper, and sometimes the rounded metal end of a wax 5 tool.

Dries under a lamp

More bulking out of legs, now that the 'former' layer has dried and the putty won't slip off the wire.

That's your lot for now!

Here's a Goblin Head, done pretty quickly an d looking a bit soft in this massive close up. looks OK in real life, honest! I used a pin and a scalpel at some points in this sculpt.

Here's some I made earlier...!